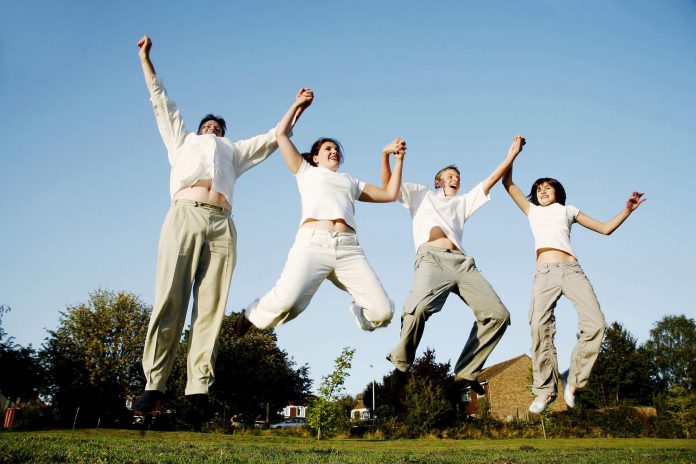 Try going as someone who’s full of energy, who’s relaxed, well-rested and raring to go to a Halloween party. That’s got to be a very original look for you this year. Nobody will be able to guess who you are.

Alas, things are not so simple. Autumn, as we all know, is a bit of a lazy season. The slow decrease of sunlight has this effect on people. John Caldwell, Ph.D., believes that as sunsets get earlier, the level of melatonin, which causes sleep, starts to increase. He formulated this through research done within NASA and the US military. Now, put stress from your office into the mix, an unhealthy diet, lack of sleep, and so much time spent swiping on your tablet. That’s a recipe for low energy levels.

But fear not. We have what we consider to be sound methods to get you that much needed energy boost. Go through the list and find the one strategy that’s right for what you’re going through. We also have a list of devices that help you sleep better.

The First Type of Tired

Whether if it’s from drinking too much alcohol or experiencing what others call sleep inertia, the feeling of being groggy and disoriented when you wake up, which can be compounded if your alarm clock bursts out in all its glory to shatter your deep sleep, can be too severe to handle according to research. Caldwell believes that it takes the brain that is barely awake, thirty to forty-five minutes to recover from the disorientation, and start sending signals again at a regular, waking speed.

Drinking cold water can take care of this.

Downing a glass of really cold water and rinsing your face with it can make the difference. Jacob Teitelbaum, M.D. and writer of From Fatigued to Fantastic! Says that the low temperatures can trigger the release of adrenaline, which increases your heart rate and the flow of blood to the brain. Consuming a glass of cold water also reinvigorates cells that are dried up from being dehydrated the whole time you were asleep. The drying up of cells can also be a cause of fatigue.

The Second Type of Tired

The hormone cortisol is produced in massive amounts when you encounter stressors, from work to your social circles, to even situations where you face imminent danger. You energy level is temporarily boosted but then it crashes when your body fails to run alongside the demand of the hormone. Cortisol levels then plummet and you crash when you have to stay in tip-top shape.

Green tea is the way to go.

Avoid coffee. Caffeine in huge amounts, might keep you shaking. It might have an adverse effect on your mood, and could lead to heart palpitations. But green tea is a different story. Although it has caffeine, the amount of it is just right to increase production of adrenocorticotropin, which in turn helps unleash cortisol. Researchers in Australia note that green tea also has ingredients that help a person be calm and focused. Drink green tea around an hour and a half before you need its effects because it activates caffeine slower than coffee.

The Third Type of Tired

The body is by no means a machine. It goes through constant renewals and renovations. A lot of this happens when you sleep. If you have a lot less sleep than you need on a regular basis, your body will bill you for the sleep that you’re short of. Looking at spreadsheets and computer screens all day long can worsen the problem. This is why there are times your eyes seem impossible to open.

A short break should do the trick.

If you can’t sneak in a power nap at the office, have a conversation with one of your good friends in the workplace. In a research by Caldwell in NASA, those who lacked sleep got a boost from having a seven-minute conversation with a friend. Just lifting your butt off your office chair can help too. Tired people had better results on tests on alertness when they stood rather than sat and answered. Some studies also shows that sitting for long periods of time can be harmful to your body as well.

The Fourth Type of Tired

What is your first meal of the day like? The food you eat at the start of the day determines the performance of your blood and sugar. If you don’t eat breakfast, your brain and muscles don’t have the necessary amount of sugar to power them well. If you consume processed carbo-loaded food, like donuts, you’ll have a short sudden heightening of sugar levels, but then surely crash. Dr. Eva Cwynar, writer of The Fatigue Solution says that although insulin aids in the clearing of sugar, it has as a side effect the alteration of cortisol production. This feeling of complete exhaustion is also called “adrenal fatigue”.

Consume lots of protein to combat this effect.

Consume food with at least ten grams of protein— for example, two eggs. This will help in the steady production of blood sugar and subsequently, energy. Cwynar believes that protein can lead to insulin and cortisol stabilization. Even with a hearty morning meal, a bit of protein can be a big help.

The Fifth Type of Tired

Sometimes it’s a psychological thing. Sometimes, when you feel tired, you’re just thinking you’re tired. A research conducted recently in Wales observed that bikers who were psychologically tired biked less intensely than those who weren’t. The researchers noted that this was the result even if both groups had an almost identical cardiovascular and muscular response to physical training. The researchers also go on to say that being drained mentally can affect the frontal cingulate cortex, which is a part of the brain that motivates you, makes you emotional, and perceives how much work your body does.

Listening to the kind of music that makes your spirit soar, so to speak, can enhance your performance. Some experts observed that those who listen to music can perform a strenuous physical activity longer. They even saw that the advantages that music provides are more than just endurance. Researchers from California State University those who had music they loved playing on their music players exercised faster and more intensely. We recommend a different type of music when doing cardiovascular workouts and another kind of music when lifting.

The Sixth Type of Tired

Consuming a lot of carbs at noon can cause your brain to be drained in the afternoon. Food loaded with carbs is a sure-fire way to make your insulin levels go through the roof, while crashing your focus. Dan Benardot, an associate professor at Georgia State says that if insulin responds too high too quickly, too much sugar will be taken from the blood. This leads to brain drain which in turn leads to fatigue.

Reduce the carbs or increase the fiber you consume.

Add some fiber to your lunch. It relaxes digestion and slows the releasing of insulin. If baked potato is part of your lunch, consume the skin. The skin of a potato has a lot of fiber known as pectin. This particular fiber can delay the movements in your digestive system. The slower food moves in the digestive system, the more regulated absorption into the bloodstream becomes. When having a feast is inevitable, munch on some fruits. Grapes or apples will create stability in your blood sugar.

The Seventh Type of Tired

Imagine going through a lot of paperwork when you suddenly seemingly are unable to lift your pen to sign some documents. You’ve hit the bottom of your circadian rhythm, which we call the afternoon slump. This happens around one to three in the afternoon. This is mainly because your cortisol levels, which are usually high in the morning, drop during this time of the day. And the hormone responsible for making you sleepy, melatonin, is produced in great quantities at this time.

Find the right kind of light and expose yourself to it.

A research conducted in 2011 in Switzerland showed that those who stayed near blue lights produced more melatonin. A fluorescent light which is 6500K (cool light) is helpful. Install it near your workstation. Turn it on at noon. Leave it on until five in the afternoon. This will cause stabilization in your circadian rhythms, and make you sleep better.

The Eighth Type of Tired

Don’t drink coffee before drinking alcohol. A review from the Cedars Sinai Medical Center states that the combination is dangerous since caffeine blocks the depressant effect of alcohol. Coffee may temporarily hide how drunk alcohol has made you. When you drink one after the other, you may not be able to judge just how drunk you are, and this could lead to overdrinking. And as soon as the caffeine high disappears, your body will be wasted and severely lacking sleep, which is very very bad.

Set your alarm for ten to twenty minutes. This is the ideal time for a power nap which can help you feel refreshed.

The Ninth Type of Tired

Your circadian rhythm works in strange ways. Around sixty minutes before you go to sleep, you may feel yourself dozing off. That’s your body telling you you’re tired. Cwynar believes that as cortisol levels go down, you get tired. After all, you’ll be sleeping in an hour so the levels should be low.

Soldiers in the US army receive gum with caffeine to help them stay up and about during their duties. To re-energize oneself for three to four hours, chew on gum with a hundred or two hundred mg of caffeine for sixty seconds. A gum can deliver caffeine quicker than coffee because of the absorption rate of the blood vessels in the mouth and throat.

The Tenth Type of Tired

When testosterone levels drop in the evening, you feel fatigued. This is was Dr. Scott Isaacs claims. This drop in the hormone has a negative effect on you libido and endurance. Cwynar states that testosterone is one of the top boosters for men.

Work out to get that mojo back.

Physical training has been reported to increase testosterone levels in men, while significantly improving how they perform in bed. If you have a higher overall level of testosterone, the drop at night will hardly matter, and will hardly affect your performance with a sexual partner. Testosterone levels increase after a single training session, so work out prior to a hot date. Around half an hour of lifting or an entire hour of lifting and cardiovascular exercises is good. Doing more may have the opposite effect on your magic hormone concludes a research conducted in Spain.

7 Foods to Eat to Stimulate Your Liver

Anastasia Simmons - August 14, 2019 0
Our body is constantly exposed to toxins that it is not surprising that we become at risk from pain, inflammation, as well as various...