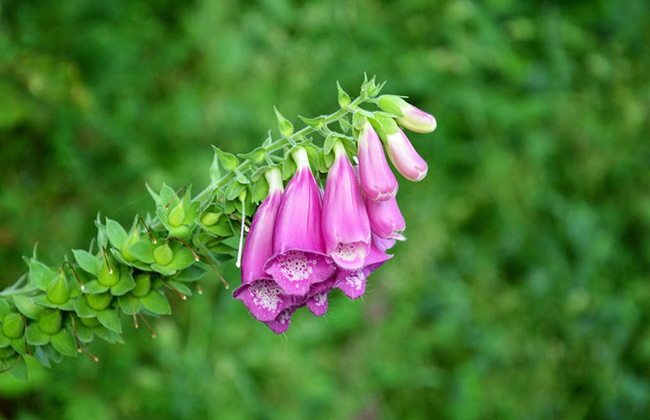 First things first: foxglove is a highly toxic herb. Its usage should always be done under the direct supervision of an experienced herbalist or medical professional. Self-medication with foxglove should be avoided at all cost.

When employed properly, however, foxglove can be very beneficial. It’s something that can be used for detoxifying the body as well as controlling inflammation, which is linked to the development of many health problems, which range from diabetes, cancer, osteoporosis to heart disease.

Speaking of heart disease, one of the most popular uses of foxglove is for regulating the rhythm of the heart. It’s for the fact that the herb contains digoxin, which is actually an ingredient in drugs for treating heart problems.

Because of the presence of digoxin in foxglove, the herb is considered as poisonous. Every year, a lot of people suffer from digoxin toxicity from the use of foxglove. This is the reason why purchasing foxglove in various preparations such as those in powdered or extract form is banned in some countries.

Despite of that, there are actually many benefits that are associated with the use of foxglove, provided that it is used in the correct dosage and manner. Some of these health benefits are:

Foxglove is known to have astringent properties, which means that it is capable of shrinking or constricting tissues of the body, including the blood vessels. This is the reason why the herb is oftentimes used on people who are suffering from bleeding disorders. Women who bleed heavily during their periods can benefit from foxglove use, too.

Manages Inflammation and Aching of the Joints

Some preparations of foxglove are intended for topical use, such as those that are in the form of salves and ointments. They are excellent for application on swollen and painful joints. The said foxglove preparations also have analgesic properties, making them very effective at causing pain to go away.

Foxglove is also traditionally known as an excellent cleanser of minor wounds and burns because it has antimicrobial properties, which makes it very good at keeping an infection at bay. Various inflammatory conditions of the skin can also be remedied with the topical use of foxglove.

Flushes Out Toxins That Have Accumulated Within

Another property of foxglove is its ability to increase production of urine, which is known in the medical community as “diuresis”. Due to this, foxglove is sometimes employed for the removal of waste products and poisonous substances in the body with the help of the kidneys and the rest of the excretory system.

Promotes Normal Rhythm of the Heart

Last but not least, foxglove is something that is known for strengthening the heart muscles and promoting regular heart rhythm. In fact, the herb is primarily known for such. People who are suffering from hypotension or low blood pressure may benefit from the use of foxglove, too, as it can cause the blood vessels to contract.

The importance of using foxglove under the direct supervision of a trained and experienced herbalist cannot be stressed enough. Self-medicating with the said herb is not a good idea because it can cause problems, including death, if it’s employed in large doses due to the fact that it contains the chemical digoxin.

If you are a pregnant or breastfeeding woman, refrain from using foxglove or any preparation that contains it. Make sure that you let your doctor know about your plan on trying the herb. This is most especially true if you have a heart condition and taking prescribed medications for it.

What Happens to Your Body If You Eat Nothing But Fruits?

Josephine Mills - June 6, 2018 0
Fruits are healthy and that is a fact. They are loaded with antioxidants, dietary fiber, vitamins and minerals. More importantly, they are devoid of...