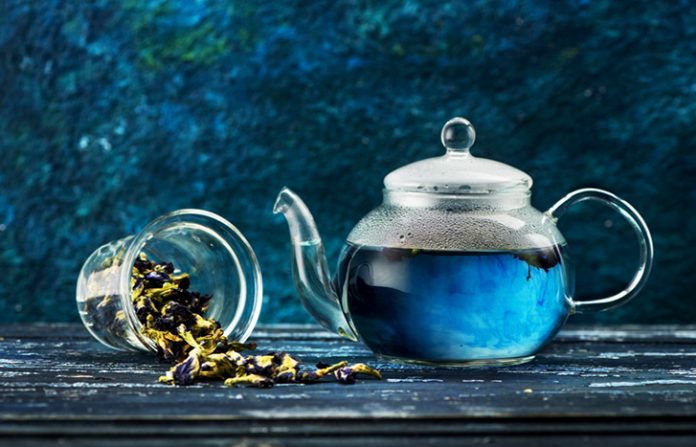 No, drinking a cup of freshly-brewed blue tea won’t leave you feeling blue. Instead, it can give you a sunshiny disposition as it has the ability to beat the blues.

But there are so many other health benefits to enjoy for welcoming blue tea into your life.

If you like to get to know this herbal beverage with an eye-catching color more, keep on reading this article as it will introduce you to everything you need to know about blue tea.

Blue tea is called that way because it possesses a bright blue color. It gets its striking hue from the fact that it is made from steeping some dried blue-colored flowers of the butterfly pea plant. Also known as blue pea or pigeon wings, the plant is common to an assortment of Southeast Asian countries.

Other than for making tea, the flowers of the butterfly pea plant is also usually employed for making dyes.

Going back to blue tea, it is a well-known herbal drink especially in Vietnam and Thailand where it is served right after dinner. Many love adding a little honey to it in order to sweeten its earthy taste. Adding a little lemon juice causes a chemical reaction that turns blue tea’s characteristic blue color into purple.

One of the nicest things about blue tea is that it is absolutely devoid of caffeine. It goes without saying that it’s perfect for those who are extremely sensitive to caffeine. A cup of blue tea won’t leave them experiencing heart palpitations, anxiety, dizziness, nausea and hand tremors. And because it has no caffeine, blue tea may be consumed at bedtime especially by those who have insomnia as a result of stress (more on this later).

These days all over the planet, blue tea is especially popular among individuals who wish to get rid of excess pounds. It’s for the fact that certain compounds in it are capable of causing the metabolism to run at a much faster rate.

Some scientists say that drinking blue tea on a regular basis is ideal for people who have lots of belly fat. Everyone knows that it’s fat in the belly that’s the most difficult to get rid of. Especially when paired with healthy eating and regular exercise, blue tea is said to help shrink the waistline without much trouble.

But blue tea is capable of bringing so many other benefits into your life other than a smaller waistline.

Earlier in this article, it was mentioned that blue tea has the ability to drive away the blues. Some of the herbal beverage’s compounds with antioxidant properties are scientifically-proven to help lift the mood.

Needless to say, blue tea can be used as an alternative to herbal drinks that are commonly recommended for individuals who are battling depression. Some of the most common examples of those are chamomile tea, lavender tea, lemon balm tea, holy basil tea, passionflower tea and valerian root tea.

It’s also something that can be consumed by those who are leading very stressful lives as it has the ability to soothe both mind and body, thus allowing for a considerable reduction in the levels of stress hormones in the bloodstream.

Are you a beauty-conscious individual? Then you should consider having a cup of blue tea on a regular basis. It’s like drinking an anti-aging elixir because some of the compounds in it are said to help considerably slow down the aging process of the skin.

Have you already tried drinking blue tea before? If yes, feel free to share your experience with it in the comments section below.

Josephine Mills - March 6, 2017 0
Thrombocytopenia is a medical condition that involves low platelet count. Ranging from mild to severe, it is characterized by bleeding, since thrombocytes or platelets...